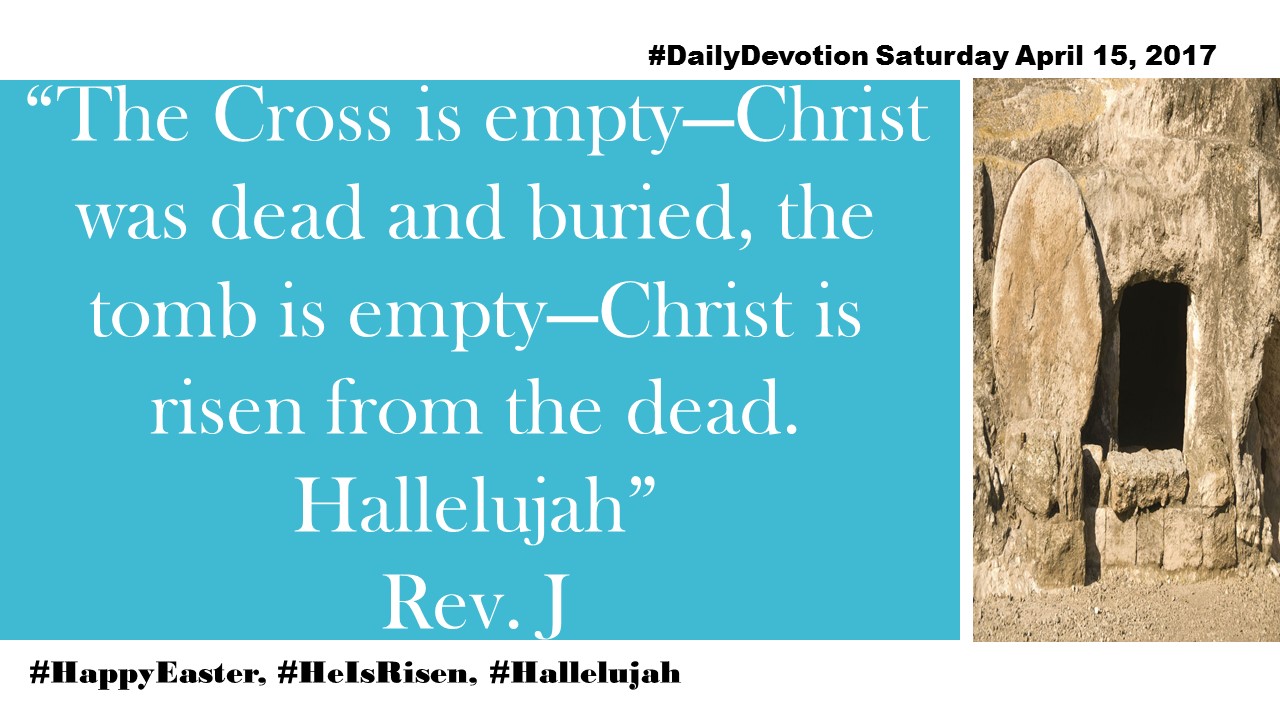 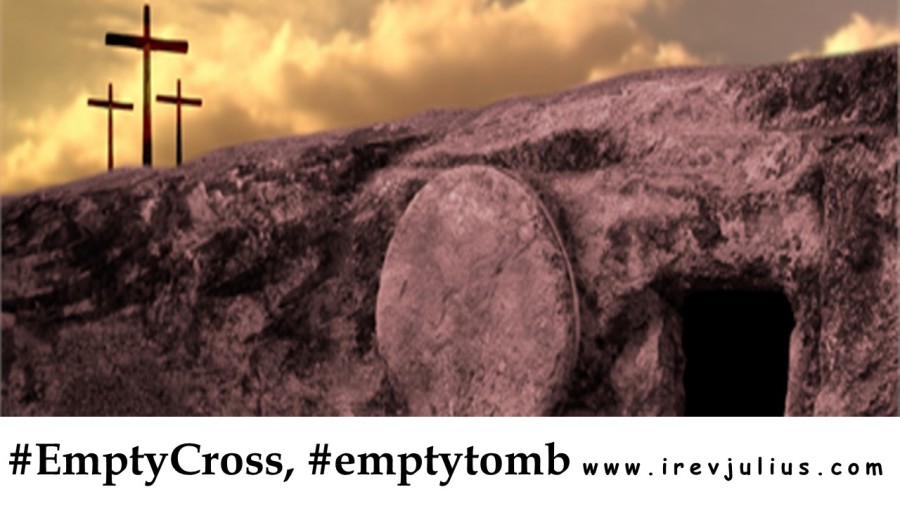 “So they went and made the tomb secure by putting seal on the stone and posting the guard” (Matthew 27:66).

The resurrection happened about two thousand years ago affirming Jesus’ claim that he will rise in three days. The resurrection is very important in that it not only affirms the truth of Jesus’ claim of rising after three days, it also makes us know that the claims ascribed to him in the scriptures are true of him. Many continue to content his death and resurrection, others saying that he did not die rather someone who looked like him was crucified in his place. Others continue to believe the fabricated story put in the lips of the guards by the chief priests and the elders that his disciples came and stole his body when they were in deep sleep (Matthew 28:11-15). For to me it seems very clear that the man Jesus—Lamb of God and savior of the world indeed died on the cross and rose from the dead.

Jesus died, no one else died in his place

Some believe that in the Biblical account, Jesus’s crucifixion did not last long enough for him to die, while others opine that God gave someone Jesus’s appearance or someone else replaced Jesus and the executioners thought the victim was Jesus, causing everyone to believe that Jesus was crucified. A third explanation could be that Jesus was nailed to a cross, but as his body is immortal he did not “die” or was not “crucified” [to death]; it only appeared so (this view is rare).

Those who argue as above try to do it in a supposedly high regard for Jesus, that he as a Holy Prophet of God, couldn’t be allowed by God to be killed or nailed on the cross. But to deny Jesus’s death by crucifixion is to deny history, to deny his (Christ’s) word, to deny him (Jesus Christ), and to deny the revelation of God about the man Jesus and redemption through his sacrificial death.  Without much toil throughout all the scriptures and historical evidence to the death of Jesus on the cross, within Matthew’s twenty-seventh chapter is a series of events leading to the death of Jesus providing a handful of prove that indeed Jesus died.

Let’s begin by Judas, the traitor, one of the twelve who traded Jesus to the priests and elders. Judas the son of Iscariot sought to hand over Jesus to the chief priests and the elders and he was awarded thirty silver coins. After successfully executing his mission, Judas realized he had handed an innocent man who probably will not survive death from the wrath of the chief priests and the elders of Israel. He chose to die before the man he betrayed was put to death, he would not like to watch an innocent man whom he had handed over to face death die. Of him, Matthew writes;

When Judas, who had betrayed him, saw that Jesus was condemned, he was seized with remorse and returned the thirty pieces of silver to the chief priests and the elders. “I have sinned,” he said, “for I have betrayed innocent blood.” “What is that to us?” they replied. “That’s your responsibility.” So Judas threw the money into the temple and left. Then he went away and hanged himself (Matthew 27:3-5).

Next, Jesus at Pilate the Roman governor’s court was indeed condemned to death. Pilate’s wife persuaded her husband not to pass a death sentence on Jesus; she said, “Do not have anything to do with that innocent man, for I have suffered a great deal today in a dream because of him” (Matthew 27:19). Nevertheless, “the chief priests and the elders persuaded the crowd to ask for Barabbas and to have Jesus executed.” They (the crowd at the persuasion of the chief priests and elders) shouted; “Crucify him!… Crucify him!” (Matthew 27:20-23). The chief priests and elders were determined, they wouldn’t let Jesus go free, there is nothing more they would like to see than Jesus crucified.

“When Pilate saw that he was getting nowhere, but that instead an uproar was starting, he took water and washed his hands in front of the crowd. “I am innocent of this man’s blood,” he said. “It is your responsibility!” All they answered, “His blood is on us and our children!” Then he released Barabbas to them. But he had Jesus flogged, and handed him over to be crucified” (Matthew 27:24-26). By this time, already the crucifixion of Jesus was guaranteed, the sentence was passed and Jesus already handed over to his executioners. The wrath of the chief priests and elders really wouldn’t allow for Jesus to be sparingly crucified to let him survive. So, aided by the soldiers, Jesus was led to the place of skull—Golgotha to be crucified.

The soldiers mocked him, crucified him and everyone made fun of him. “Those who passed by hurled insults at him, shaking their heads and saying, “You who are going to destroy the temple and build it in three days, save yourself! Come down from the cross, if you are the Son of God!” Even the chief priests, the teachers of the law and the elders confirmed that indeed it was Jesus hanging on the tree, they too mocked him; “He saved others,” they said, “but he can’t save himself! He’s the king of Israel! Let him come down now from the cross, and we will believe in him” (Matthew 27:40-42).  These statements alone testify that indeed Jesus the Son of God was truly crucified, it was him who was mocked as he hanged on the tree. For over three hours, he was raised up on the cross in a public spectacle and after having shouted “Eli, Eli, lema sabachthani?” he breathed his last.

As Jesus hanged on the tree, certain extra ordinary happenings made many to confess that truly Jesus is the Son of God. First, for three hours (noon to three in the afternoon), there was an unusual darkness. Then the curtain that was in the temple torn into two from bottom to top.

“The earth shook, the rocks split and tombs broke open. The bodies of many holy people who had died were raised to life. They came out of the tombs after Jesus’ resurrection and went into the holy city and appeared to many people” (Matthew 27:51-53).

The chief army commander guarding the place of crucifixion also called the centurion was filled with awe and he confessed; “Surely he was the Son of God.” Indeed, it was no other person than Jesus, the Son of God who was crucified, died and was buried.

Interesting is the event that comes after Jesus was buried by a one, Joseph a man from Arimathea a disciple of Jesus who requested from Pilate to have Jesus buried in his own tomb. Pilate granted his request and he took Jesus’s body and laid him in his tomb. The chief priests and the elders recalled Jesus’ claim of resurrection, so they preferred that tomb to be sealed and guarded until the third day to ensure that his disciples don’t sneak and take his body away from the tomb. Pilate heeded to their advice and had the tomb sealed and well-guarded. Beyond doubt, Matthew’s narrative of the account that led to the death of Jesus clearly shows that it was impossible to have Jesus spared of death, indeed, Jesus truly died and was laid in a tomb that was sealed and guarded.

Jesus breaks the seal, rises from the dead

The seal of the governor which no one else could break without his permission broke loose on the first day of the week—also the third day when the Lord Jesus was in the tomb. The seal was broken, the stone placed on the tomb rolled away and Christ triumphantly rises from the dead in a glorious body, never to die again. This Jesus who also revealed himself to John the evangelist on the small Island of Patmos as the Lion of the tribe of Judah is a seal breaker. When Pilate had put a seal on his tomb that no one else is to break, he broke it. To John was revealed a scroll sealed with seven seals. There was no one in heaven or on earth found worthy to break the seals. John wept because no one was found worthy. But the angel of the Lord comforted him and saying; “Do not weep! See, the Lion of the tribe of Judah, the Root of David, has triumphed. He is able to open the scroll and it’s seven seals” (Revelation 5:5).

Indeed, Jesus triumphed over death, he triumphed over sin and he is worthy of all things. He is able to break a stony heart and make it fleshy to heed to the word of God. He is able to break the seal of the power of the evil one in your life that keeps you under the bondage of sin and let you walk under the Grace of God, for in him we can defeat sin and death. Christ and Christ alone is the one who can break the burdens on your shoulders and have you connected to him to take away all that wears you down. The Cross on which he was hanged stood empty, the tomb in which he was laid was empty, Christ has triumphed over the power of death, he is risen and now stands in the hearts of everyone who believes in him saying; “peace be with you.” I pray that this Easter, you will encounter the resurrection power of the risen Lord Jesus. That you will find life and even life in abundance in him (John 10:10). That in a world which is seemingly fast growing in hopelessness day by day, you will find hope in the resurrection of Christ. That as we live at a time of uncertainty of truth, you will find the truth in the risen Lord Jesus, for he is the way, the truth and the life (John 14:6).

Surely Jesus is risen, He is risen indeed, Hallelujah. May his name be praised now and forever as we anticipate his coming again to receive the church in glory.

Unless otherwise indicated, all scripture quotations are taken from the New International Version (NIV).

Rev. Julius Izza Tabi is a pastor in the Anglican Church of Uganda, Ma’di & West Nile Diocese. Julius served as an assistant Chaplain and lecturer at the Arua Campus of the Uganda Christin University. He is currently a candidate of Master of Philosophy in Religion, Society and Global Issues at Det Teologiske Menighetsfakultet alias the Norwegian School of Theology, in Oslo, Norway. For pastoral assistance you can email him or check how you can reach him here and you can also help to support this site by donating here.